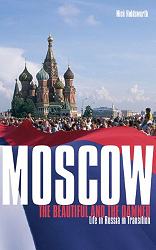 Moscow, the Beautiful and the Damned: Life in Russia in Transition (2nd Edition)

Paperback: 304 pages
Publisher: Andre Deutsch Ltd; New edition (2 Jun 2003)
Experience the impact of historic and unplanned change on a people forced to undergo the most breathtaking ongoing revolution of the 20th century, through the eyes of the people who have lived through it. The generation who have emerged from a Soviet past into a modern future were schooled under Soviet leader Brezhnev, studied at University or started families or careers during Gorbachev’s perestroika reforms, and have been confronted by a society changed beyond recognition since the Soviet Union collapsed in 1991 and Yeltsin’s unpredictable rule.
Review:
‘This is history from the bottom up, not the top down approach favoured by most ‘authorities’ on Russia. Here the little people take centre stage against a backdrop of chaos, revolution and, occasionally, hope. Here are Dostoevsky’s Insulted and Injured, but also Heroes and Anti-Heroes of our time.’ – Daily Telegraph ‘Nick Holdsworth has done something seemingly simple but actually very rare – he has trusted the Russians to speak for themselves.’ – Independent 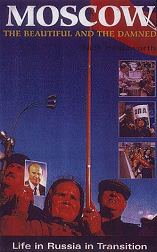 Moscow, the Beautiful and the Damned: Life in Russia in Transition (1st Edition)

A social insight into modern Russia from the viewpoint of the people whose lives, hopes and dreams have been so altered in a period of change, written by a British journalist living and working in Moscow.
From the Author
Richly illustrated glimpse of life in post-Soviet Russia.
“Moscow: The Beautiful and the Damned — Life in Russia in Transition” is a richly illustrated glimpse of life in Russia since the collapse of Communism.
Drawing on interviews with ordinary Russians, young and old, rich and poor, famous and obscure, my aim is to give readers an intimate view on how people living through historic turmoil survive and sometimes thrive; make sense of their lives or lose track of their path.

Using my own experience of visiting, living and working in Russia for much of the last ten years, my aim is to describe the world behind the headlines, one rarely seen by those outside this vast and frequently incomprehensible country.

This is the book I always wanted to read about Russia but couldn’t find in the book shops.

If you are interested in Russia or intrigued as to how people cope when their whole world is turned upside down and all the blueprints for guiding them are torn up and thrown away, you will, I hope, find this book interesting and enjoyable.

If you do read it, I would very much appreciate you comments. It’s my first book and the feedback I get will, I trust, help me with future books.

In anticipation, thank you. 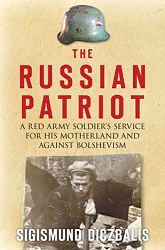 The Russian Patriot: A Red Army Soldier’s Service for His Motherland and Against Bolshevism

A committed young Communist who joined the Red Army on the day Hitler’s Blitzkrieg tore across the Soviet Union’s borders in June 1941, Sigismund unquestioningly offered his life to the service of his motherland. Captured and thrown into a German prisoner of war camp, fate offered him escape from certain death through service to the ‘new order’; chance made him a Red partisan spy. Ordered to infiltrate a German-run anti-partisan unit, his conversion began and soon he was a committed anti-Bolshevik, joining the Russian Army of Liberation that was devoted to toppling Stalin. It was all too little too late and when in the spring of 1945 Sigismund fell into the hands of Soviet spy-hunters, death seemed a certainty…until fate once again played a part in giving him a new lease of life in a far away land. Traitor or patriot? In The Russian Patriot Sigismund Diczbalis reveals that the 60 years since the Second World War ended have done little to erase a question that has troubled him lifelong.

Sigismund Diczbalis was born in Saratov, central Russia in January 1922 and later moved to Leningrad before joining the Red Army in June 1941. Having then spied for the anti-Bolshevists after being captured, he was recaptured by Soviet forces; escaping the clutches of SMERSH – the Russian ‘death to spies’ organization – he made his way to American-occupied Germany where he married and embarked on a new life in Australia.

Nick Holdsworth is a British-born Moscow-based journalist and writer. A specialist in Russian and Eastern European affairs, Nick met Sigismund while researching the story of General Andrei Vlasov and the Russian Army of Liberation.