The Internet Thinks Putin Is Dead

Russian President Vladimir Putin has not been seen in public since March 5.

And with little further information to go by — his press secretary, Dmitry Peskov, said simply that there is“no reason to worry” and “everything is fine” — some have naturally assumed the most drastic possible thing that could have happened is what did happen.

“Putin umer” or “Putin has died,” is now trending on the Russian Internet.

There’s also a website that allows users to ask, “has Putin died?” (the automated response varies with responses like: “No, he’s alive” and “No, that’s not why it stinks in Moscow.”)

And perhaps because people find the very notion rather unlikely, social media users have been trying to imagine what a world without Putin — or a heaven with him — might look like.

It’s likely that he would have a mass funeral just like Vladimir Lenin, but would Putin be presented in his favored bare-chested uniform?

Would the outpouring of grief on state TV channels match the level of emotion shown when North Korean leader Kim Jong Il died?

And who would reach out to him first in heaven? Perhaps his longtime friend and former Venezuelan President Hugo Chavez?
Translation:
-Hello, Putin, is that you?
-Yes, and who’s this?
-It’s Chavez. Want to meet up?

But if Putin really were at death’s door, would he really show up for his final meeting on time? (The Russian president is notoriously almost always running late)

And after all, dying isn’t really in his interests.
Translation:
-Putin can’t die.
-Why?
-It’s not profitable.

Really though — is this something to even joke about?

Ugly & macabre tweeting from the enlightened liberal side of the Russia House using #ПутинУмерpic.twitter.com/5QAstXY75y

Besides, his press secretary, Peskov, has said despite his disappearance from public view he’s still “holding meetings all the time” and even “breaking hands” along the way.

Moscow (AFP) – Where is President Vladimir Putin? The Kremlin was forced Thursday to insist the Russian leader was in good health as rumours swirled online over his week-long absence from the public eye.

Putin was last seen in public on March 5 when he met with Italian Prime Minister Matteo Renzi and, ever since he postponed a trip to Kazakhstan this week, Russians have grown increasingly curious about what their usually omnipresent leader is up to.

The 62-year-old nurtures a fit, tough-guy image and rarely takes time off.

Putin also postponed a meeting to sign an alliance agreement with the leader of the Georgian breakaway region of South Ossetia, and did not show up at a meeting of the FSB security agency.

Peskov said the agreement with the rebel region may be signed next week and that Putin’s attendance at the FSB meeting was not planned. 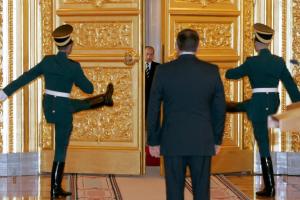 He said Putin was busy with Russia’s economic crisis and has “meetings constantly, but not all meetings are public.”

Asked if Putin’s handshake remains firm, Peskov laughed and said: “It breaks your hand.” However he evaded a question on when Putin would next be seen on television.

“As soon as the sun comes out… and it starts smelling of spring, people start getting delusions,” Peskov told TASS agency.

The last time the popular Russian strongman’s health prompted such speculation at home was when he cancelled a number of foreign trips in 2012 after appearing to have developed a limp, which the Kremlin said was due to a sports injury.

Whispers in Moscow about a leader’s health are nothing new, with Putin’s ailing predecessor Boris Yeltsin and former Soviet supremo Leonid Brezhnev the constant targets of rumours over their health.

“Has Putin died?” asks one website where the question is the only thing appearing on a blank page above a button which users can click to check, yielding responses such as “No” and “Still No”.