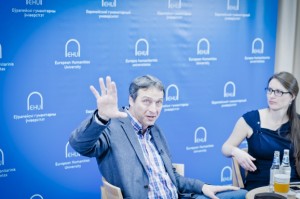 Nick making a point during his ‘public conversation’ at the European Humanities University in Vilnius, April 2014.

Here is the top line from the EHU site:

Russia’s president Vladimir Putin is using judo tactics to throw political opponents off balance, says British journalist Nick Holdsworth. According to Holdsworth, who spoke at an EHU Public Conversation “The Beautiful and the Damned—Life in Eastern Europe in Transition,” to gain more from relations with Russia, the West needs to “loosen up” and try to see things through Russian eyes.

According to Holdsworth, Putin adopts a “judo philosophy” in politics—he plans a few moves ahead and keeps his opponents off balance—and thus far, Europe and the US seem to have failed to predict Russia’s next moves…

You can read more here: http://www.ehu.lt/en/news/show/british-journalist-russias-aggressive-face-is-just-a-front